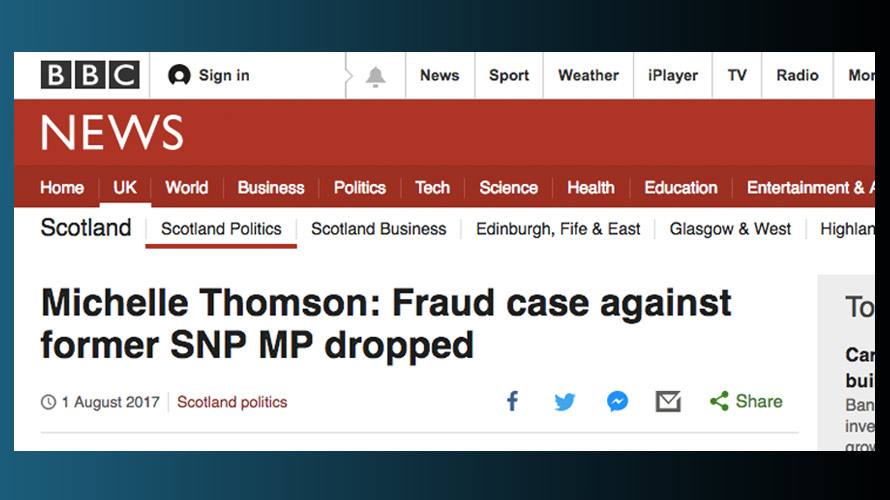 The BBC’s Reporting Scotland is, in our view, directly responsible for at least 80% of Yes supporters’ belief that the UK’s state broadcaster is biased against independence. Almost all of the worst examples of unbalanced or downright dishonest coverage over the last five years come from the flagship teatime bulletin.

But last night’s edition made even the most wearily cynical jaws drop.

Let’s just take that in for a moment.

Of course, those two bits of video aren’t related. The footage of Thomson – which is taken, in a particularly tasteful twist, from a House Of Commons session where she revealed she’d been raped as a child – has been juxtaposed with a piece from a totally different story about sentencing ….

Yesterday we noted some shockingly inaccurate initial reporting of the fact that a police investigation into potential mortgage irregularities had decided not to take any action of any kind against the former Edinburgh MP.

Thomson was never charged, arrested or even questioned as a suspect, yet the BBC and others all headlined the story “FRAUD CASE AGAINST THOMSON DROPPED”, even though in fact no fraud case had ever been brought against her.

After complaints, most outlets changed their offending headlines.

And the BBC’s own correspondent Nick Eardley even issued a correction.

But despite that, as we write this 18 hours from the initial publication, this is incredibly still the headline and opening paragraph on the BBC website’s report on the story ….