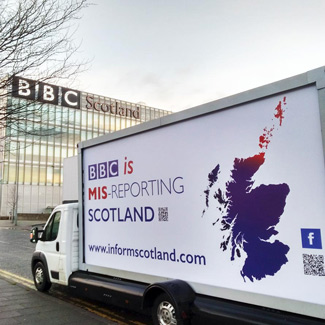 Last night, BBC Reporting Scotland broadcasted a story on the Inform Scotland billboard and Advan campaign which is presently live across Scotland for the next two weeks.

In the video, the Advan drives past BBC Headquarters at Pacific Quay in Glasgow, and the reporter says –

“In a statement, the BBC said audiences continued to regard it as the most trusted news provider and it rejected the suggestion that it’s coverage was biased.”

Our question is – where does this confident assertion come from?  Has this been published in a survey that is readily available to the public?

In a Guardian article from May 2016 aptly entitled ‘BBC audience study shows Scottish viewers are most critical of all’ – a study published by the UK government, stated that –

“On general favourability towards the BBC, Scots gave it a 5.8 score, the lowest of any UK demographic (it was 6.4 in England); only 48% of Scots supported the BBC’s expansion and its current licence fee – a low figure only beaten by households without the internet; only 37% of Scots felt the licence fee offered good value – the worst of any nation….”

“On the statement that “the BBC makes lots of TV programmes that no other broadcaster would make”, Scotland’s viewers had a negative -7, rating compared to +15 approval in England.”

Let’s play Devil’s advocate for a moment and entertain the notion that the BBC’s statement is true, and Scots do indeed “regard (the BBC) as the most trusted news provider” – surely their viewership figures would back this statement up?  But, as far as we are aware, they don’t release these statistics.  If anyone has evidence to the contrary, we would be very interested to see it.

While the BBC England staff member has asked to remain anonymous, this information does seem to reflect the Scottish people’s mass disenchantment with the BBC – the evidence of which IS readily available.  A simple web search reveals an abundance of articles and websites reflecting the frustrations of thousands of Scottish people with regards to BBC Reporting Scotland’s ongoing bias and propaganda.  This website alone has an archive of over 250 articles dedicated to this subject matter.  Click here for a good starting point.

Please be sure to go to the Youtube page where this BBC Reporting Scotland video is hosted and let your opinions be known.