Print your own Inform Scotland Poster!

You can help the Inform Scotland campaign against BBC bias in Scotland by printing out our poster below and putting it up in highly visible places.  Simply click on the image below and you will be directed to a page where you can print the image or download!

Be sure to tell your friends and family about the Inform Scotland website and our campaign against BBC bias in Scotland.

Inform Scotland are a community based organization made up of ordinary people, tired of the distortions of ‘news’ reporting on BBC Scotland where ‘spin’ and opinion have long replaced fact.

Remember – The BBC is the only broadcaster under law not to be regulated by OFCOM for bias – and this is clearly evident in BBC Scotland.

The Inform Scotland billboard campaign is about shedding light on the importance of journalistic integrity and impartiality from one of the world’s biggest broadcasters, who claims to operate by these standards but whose actions show otherwise.

Inform Scotland was created as a bridge for people who have little awareness of the existence of an alternative narrative to what they regularly hear on BBC Scotland or read in the so-called ‘Main Stream Media’.  We want to help them cross the bridge and see for themselves what’s really going on. 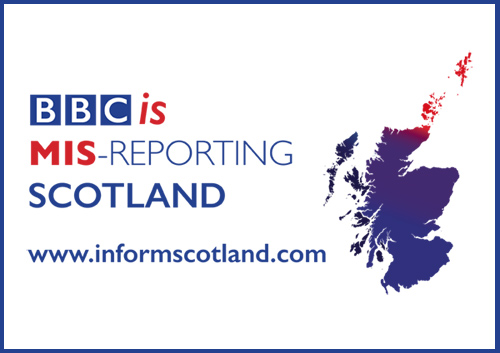